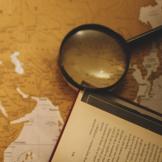 The Lost City of Atlantis

Atlantis is a legendary city, which is described in the work of the Greek philosopher Plato (c. 429 – 347 BCE). Plato told the story of Atlantis around 360 BCE. The founders of Atlantis, he said, were half god and half human. They created a utopian civilization and became a great naval power. Their home was made up of concentric islands separated by wide moats and linked by a canal that penetrated to the center. The lush islands contained gold, silver, and other precious metals and supported an abundance of rare, exotic wildlife. There was a great capital city on the central island.

Learn All About Atlantis!

You can watch the full documentary of “Finding Atlantis” on YouTube.

Make Your Own Atlantis Quest

Below are ideas to make your own Atlantis adventure at home.

Read About This Mysterious City

You’ll need a valid RHPL card to check out these books.

There are lots of great eBooks about Atlantis on hoopla.

Want more? See themed days by our staff on our Daily Adventures page.